Would Thomas Edison Have Put Up With VC’s?

A friend of mine who is an inventor/entrepreneur sent me this email, & asked me to write about this question:

I think the perception that most people have of Thomas Edison is of some sort of a geek that spent all day and night inventing gadgets.  But if you read his biography, it’s quite apparent that he was an unremitting marketer, and constantly negotiating and dealing with his investors.  So the question is, how would VC’s of 2012 deal with a Thomas Edison if he were around?  Would he even put up with venture capitalists at all?

It’s true.  When we think of Thomas Edison, we think of an inventor.  Our modern day perception of “inventors”. We would assume Thomas Edison was a geek who stayed cooped up in his mother’s basement all day and night inventing things.  The equivalent of the VC’s 2012 modernday geek: someone who sits at their computer in their mother’s basement, coding (inventing) all day and night.

Really, he had the rebel gene running through his blood.  His father had to flee from Canada because he participated in the Rebellion.  Thomas survived 3 months of school.  He had to be homeschooled.  His teacher called him ‘rotten’.  His mom was the only one who believed in him.  Personally, my favorite line from my teachers growing up was “you’re dumber then a box of rocks”.

So yes, I do have to laugh at investors when one of their main objectives is to find the Harvard or Stanford graduate with an MBA.  Many entrepreneurs, including myself, had to teach ourselves just like Thomas Edison did.  You’ll find a wide range of self taught skills because we’re “the unteachable”.  Hey, at least we’re smart enough to say “why wind up with all that debt when you just have to go home and teach yourself it all over anyway?”.

Often I see venture capitalists saying “well I have business skills, and we can hire sales teams, so I’m not looking for those skills in a founder.  I’m looking for a geek”.  Correction, they’re looking for someone they can easily take advantage of.

Or, I see them turn the other cheek to entrepreneurs building products that have previous sales experience; or have previously owned service-based businesses.  I’ve also seen, over and over again, venture capitalists only wanting to see deals with 2 founders.  One in sales, one inventing is the ideal match for the modern day VC.  Thomas Edison didn’t have a partner.  He was a loner who did both jobs.

Overtime, it just seems investors have completely lost who exactly entrepreneurs & inventors are.  Because some of greatest entrepreneurs (including Thomas Edison) were marketers, as well as inventors.  In fact, Thomas Edison started by SELLING, long before he started inventing.  His sold vegetables and candy to supplement his income.  Then, he started selling newspapers…and eventually took over the rights to exclusively sell newspapers on those trains.  Doesn’t necessarily mean he preferred to sell, or was a pushy sales guy, but he did what he had to do.  And as an inventor, he was very concerned with what would sell, and what wouldn’t. 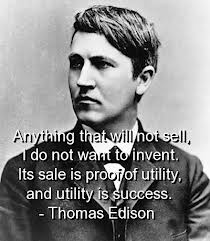 The venture capitalists I’ve been watching, tend to believe good entrepreneurs are ruthless, heartless, cold people.  Then they usually believe inventors are someone completely different (who is usually teamed up with the entrepreneur), who is a weak pushover.  Most of the entrepreneurs I know are what I would describe as “tough, but tender”.

Again, let’s go back to Thomas Edison.  Who had 6 children.  Who was famous for risking his own life to rescue a little boy from being hit by an oncoming train.  That’s how he started working on trains that eventually led him to one of his first inventions.  He got offered a job on the train after saving the boy’s life.

My last point comes with a recent personal story.  I think when we first launched our rough version, there was a scout contacting me who was involved with some of the bigger venture capitalists.  He looked like he could be one of us, wearing a leather jacket, a couple tattoos.  A rebel trying too hard to be a rebel.  But he was just rude with a huge ego.  Immediately expressed disappointment that it wasn’t perfect for them.  And I remember just saying “I’m sorry….but I don’t recall ever contacting you, or having any kind of obligation to impress you, or your little buddies over there”.

It seems you’ll run into one of two types of venture capitalists now: the corporate types who don’t get entrepreneurs at all & want to control your company, or the laid back ‘blow everything on the shiniest object & make decisions in 10 seconds because it’s not my money’ VC.  It’s very hard to find one experienced, wise, valuable, and authentic.  The one’s that understand how companies are really built in the beginning.

If they spend time with you, helping guide you, yes.  Feel guilty and try not to disappoint them.  The good entrepreneurs & mentors (even good investors) will pat you on the back and say ‘keep trying, you didn’t fail, you just found another way that doesn’t work’.  They know persistence is key.  The rest of them though, I refuse to kiss their butts.

And I don’t think Thomas Edison would’ve kissed their butts either.  That’s my answer.