5 Tips for the Introverted Entrepreneur

Almost anything you do in business is a contact sport: your first sale, your first client, fundraising, partnerships, etc.  Unfortunately for the introverted entrepreneur, that requires you to get out there and do the unthinkable – make real connections & network.  As introverts, rarely will you see one of us with a wide circle of daily acquaintances.  The issue is- we’re all introverted.  Then what happens when a bunch of introverts get together?  No one talks, but we should be.

If you go to networking events, presentations, conferences, etc.; get there early.  My motto used to be “if you arrive early, you’re a rookie”, until I learned why this strategy is so great for making connections: getting there early puts an introvert in the mindset of control.  If you walk into a crowded room, your mind can’t take control of the environment.  But if you get there early, the crowd grows after you arrive.  This physiologically tricks your mind into thinking you own the environment, which in turn, helps you feel more confident.

The majority of entrepreneurs and business owners are what I describe as fidgety.  If the presentation isn’t starting for a few minutes, you’ll see them all start fidgeting around.  They’ll pretend to play on their iPad, but really they’re just doing it so they look busy.  You have from the point they start fidgeting, to the point the presentations start to strike up a conversation.  Do not pitch them, at least I wouldn’t.  They’re expecting it.  By the time they walk out of there, they won’t remember a single pitch.  What they will remember is the cool guy or girl that sat next to them and they shared some crazy stories; and made a real connection.  Eventually, they’ll ask what you do.  Here is why:

4. You Don’t Have to Hard Sell

Good entrepreneurs don’t hard sell themselves anyway.  Because they don’t have to.  If you are pushing something really hard, it looks like you’re desperate.  One of the greatest tips an investor ever gave us here was “A hard sell is very laughable.  It usually indicates you’re a bad deal”.  If you’re trying to “push” someone to buy something, it’s usually because it’s not good.  Same reason why we ignore the salesman when he comes to our door.  People often forget when you’re selling B2B or pitching investors, you can’t sell the same way you can sell consumers.

(Tip provided courtesy of John Morrow).  The thing about being introverted, is it’s usually all in your head.  When you’re introverted, you feel like you’re on display in a crowded room, even though you’re really not.  John shared his tip of “just ask lot’s of questions.  This way, the other person just remembers a conversation that was good….because it was all about them”.

For the Extroverted Entrepreneurs:

And…just in case you’re not an introverted entrepreneur (you are the “dreaded E”) here is a picture I found to help you with your introverts (especially #4! maybe I will write a post for you guys later): 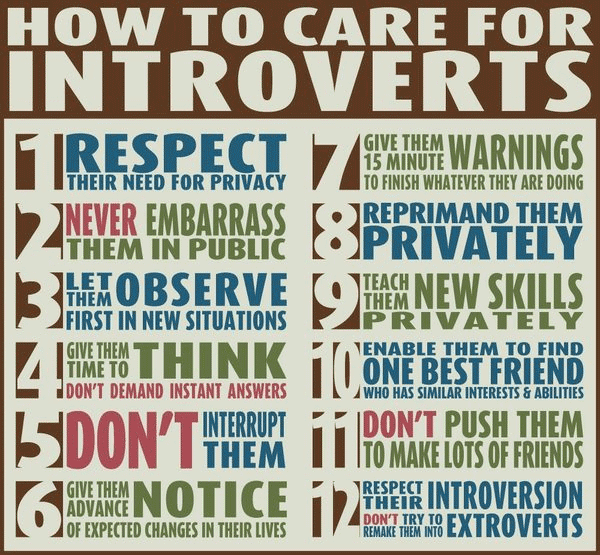